By Leslyn Keith December 1, 2022 No Comments 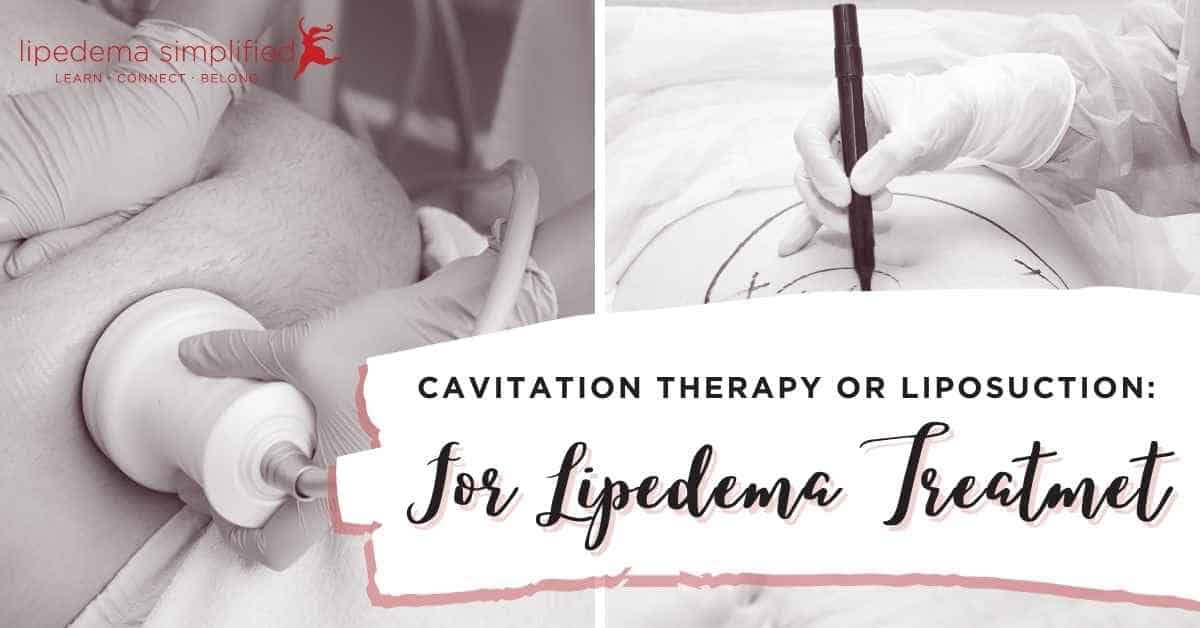 There is a study performed by a group of researchers from Egypt entitled Vacuum-Cavitation Therapy Versus Liposuction on Lipoedema in Female that I wanted to discuss with you today. It was forwarded to us by one of our Flash Briefing mini-podcast listeners. This paper was published in the Bulletin of Faculty of Pharmacy at Cairo University in July 2013.

This article is interesting to me because they wanted to evaluate the effectiveness of vacuum-cavitation therapy compared to liposuction for the treatment of lipedema in females. The authors reported that they had seen one male patient with lipedema and cavitation was not useful for him.

First, let’s define what vacuum-cavitation therapy is. Vacuum-Cavitation therapy is a type of treatment that uses ultrasonic radio waves to break apart fat cells, which are then absorbed into your body by your lymphatic system. Bruising and pain can be common short-term side effects which, unfortunately, are also symptoms of lipedema.

Methods and Materials of the Study

Let’s look at the participants of this study.

40 women with lipedema, with their ages ranging from 20 to 45 years, participated in this study. Unfortunately, no other information about the women, such as their weight, stage or type of lipedema, or the duration of their condition, was provided in the paper.

Now let’s discuss the methods they used in the study.

The vacuum-cavitation therapy provided was described in detail. They performed this treatment on the first group of participants using the Starvac Vacuum Massage, which is a device that uses a unique “massage-roller-suction” action. Treatments were performed twice per week for three months. Each session was 30 to 45 minutes long. No details were provided about the liposuction procedure that was used for the second group or what comprised the routine physical therapy treatments that both groups received.

Measurements were done at baseline and 3 months after treatment or surgery concluded. A circumference measure of the mid-thigh was performed with a tape measure. A skinfold caliper was also used on the thigh to estimate the percent body fat.

The conclusions that the authors provided were that both interventions were beneficial for reducing lipedema fat in the thighs, but cavitation therapy seemed to offer more reduction than liposuction.

This study is important for women with lipedema because it suggests two potentially very effective treatments for reducing lipedema fat. Unfortunately, no information was provided about the outcomes of each treatment on other symptoms of lipedema such as pain and fibrosis. This would be valuable information to have if trying to decide between one treatment or the other. Further study to look at these two treatments in combination would also be interesting.

Although we don’t know specifically which liposuction procedure was used in this study, we can make some comparisons between these two treatments. It seems likely that the cavitation treatment is non-invasive and may be affordable even if not covered by insurance, while liposuction is an invasive procedure that is potentially more costly. Cavitation would have fewer risks associated with it than liposuction but it may take longer to get results. In this study, measurements were reported after 3 months of twice-per-week cavitation treatment, so it’s unknown if the fat reduction was achieved sooner. Recovery from a liposuction procedure may take up to three months, so in this way, the total duration may be similar.